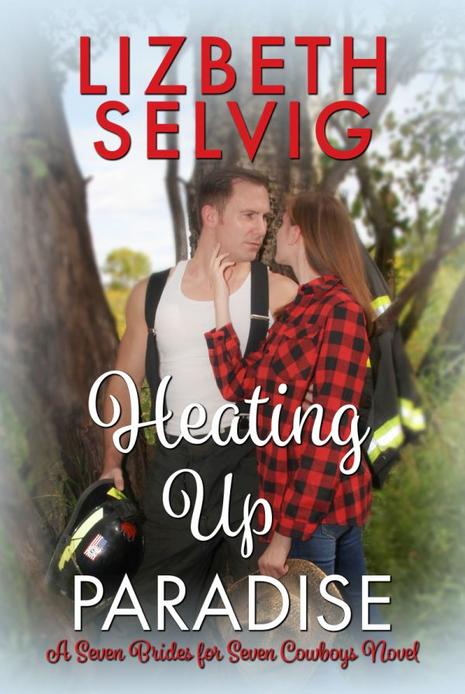 where Love always leads you home

Welcome back to Paradise Ranch in this exciting and heartwarming fifth book of the #1 Bestselling series "Seven Brides for Seven Cowboys."

Kelly Crockett longs to be renowned for her culinary skills. But achieving her dream feels all but impossible when Fate insists on sabotaging every idea for transforming her award-winning Denver coffee-and-sandwich shop into a Michelin-class restaurant.

Kelly's life’s-a-party attitude helps her stand out from her triplet sisters. But dogged cheerfulness doesn’t help when a fire near her restaurant sends her appearance on a career-building cooking show up in flames. Devastated, she returns home to vast and beautiful Paradise Ranch. While helping in her sister’s new restaurant, she conceives a bold plan for rescuing her dreams. But Fate isn’t finished throwing obstacles in her path, not the least of which is a gorgeous but troubled man who’s all wrong for her.

Damien Finney believes that after three years as a firefighter, two tours in Afghanistan, and one year in PTSD therapy, he’s ready to leave hell and start the next chapter of his life. After rigorous training, he’s earned a spot on an elite smokejumper crew–but then a failed jump lands him right back on the Devil’s doorstep.

After Afghanistan, Damien found healing at Paradise Ranch in a program pairing veterans with wild mustangs. With his smoke-jumping career in jeopardy, he returns to the ranch and the horses, seeking a miracle cure to save his future. The last thing he needs is a bubbly extrovert-of-a-woman invading his refuge and throwing his plans off course.

Although they fight it, the heat between Kelly and Damien’s opposite personalities builds. But there’s trouble in Paradise: Kelly’s plans cause strife with her sisters. Damien’s past haunts him. And when wildfires threaten the land they both love, each must decide if the heat will forge a new future or tear them apart. Are they brave enough to see that buried beneath the dreams they hoped for is the dream they actually need—one that’s theirs together?